FHHSP directors Clyde Gosnell and Dr. Louise “Omie” Warner, who just last year were inducted into the Ohio Natural Resources Hall of Fame, have been honored once again. 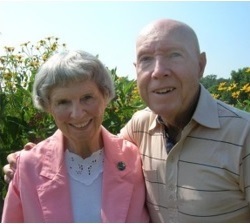 FHHSP directors Clyde Gosnell and Dr. Louise “Omie” Warner, who just last year were inducted into the Ohio Natural Resources Hall of Fame, have been honored once again. In December 2020, Clyde and Omie received the prestigous President’s Award from the National Association of State Park Directors, an organization devoted to helping state park systems effectively manage and administer their respective state park system. The Friends of the Hocking Hills State Park is incredibly proud that these two individuals, who have formed a husband and wife team that has become “an unstoppable force of nature,” are an integral part of our organization.

Clyde and Omie have each served as FHHSP directors for over 15 years. Their most notable accomplishments as directors are not coincidentally two of our “biggest swings.” They spearheaded the project to, and were instrumental in, convincing the state to reroute State Route 664 around the Old Man’s Cave area of Hocking Hills State Park in 2012. This project not only preserved the natural beauty of the Old Man’s Cave gorge area; equally importantly, it enhanced visitor safety by ensuring that visitors to Old Man’s Cave would no longer need to cross busy State Route 664 from the parking areas on the opposite side of the road.

Their other most notable accomplishment involved managing the fundraising, design and construction of John Glenn Astronomy Park, which opened at Hocking Hills State Park in June 2018.  JGAP, as we have come to know it, has become the premier destination for astronomy exploration in the darkest skies in Ohio,  which works to spark interest in science, learning and exploration by sharing both the day and night skies with park visitors.

We respectfully ask that you join us in honoring these dedicated individuals and help further their work to preserve and enhance the natural beauty and wonder of Hocking Hills State Park by making a donation to FHHSP today. Your donation is tax-deductible. 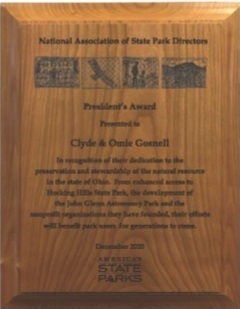